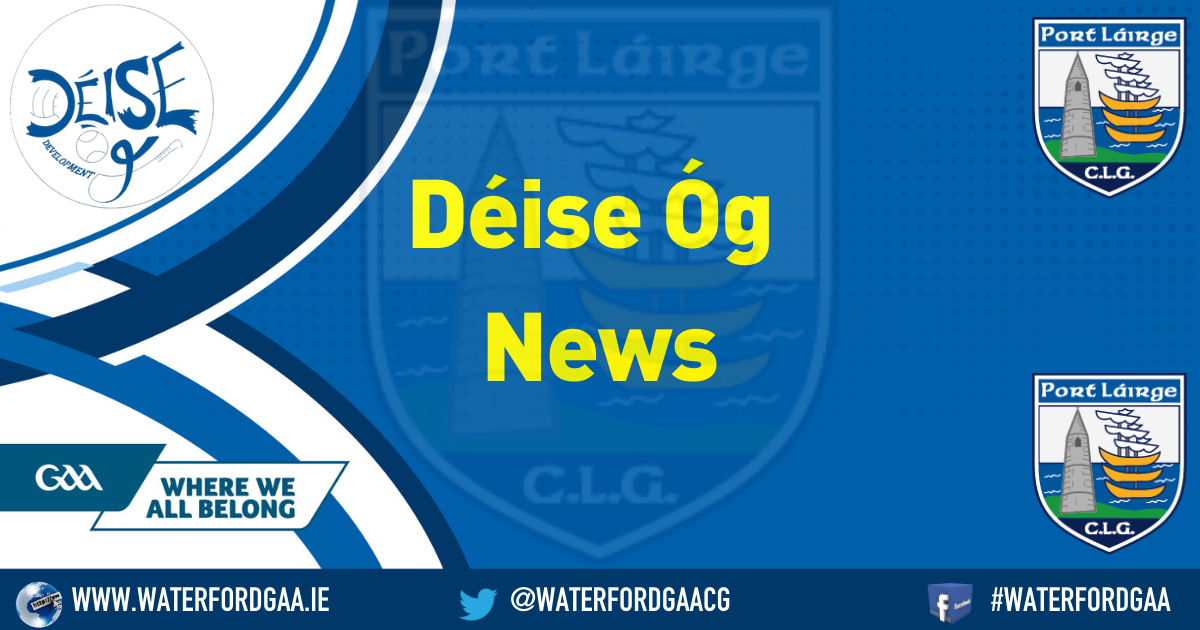 As 2021 draws to a close, we caught up with three of the hardest working people in Waterford GAA circles, the GDA’s whose work often goes unnoticed but have played a central role in ensuring kids, and parents get involved in GAA and remain involved for as long as possible. First of all we caught up with John Quinn of the famed Mount Sion club who is Games Development Administrator for the mid-county area in the Déise!

John has being doing this job for a long number of years but his passion and attention to detail remains as strong as ever. Like everything, it was a very slow start to 2021 as Covid-19 was rampant in our communities, and for a long while there looked like there was no light at the end of the tunnel. John Quinn admitted the start of this year was to prove very challenging as we all adopted to an online platform, be in terms of work or education; “Everything was a little bit up in the air especially at the start of the year where we didn’t really know what activities we were going to be able to provide or what kind of interaction we were going to have with clubs and that. At the start of the year most of our interaction with the clubs was done online (via Zoom which we’ve become well accustomed too at this stage), which although it helped, it’s not ideal because there’s nothing like meeting the clubs face to face and see what’s going on and see what their requirements and that are so ’twas difficult to start with but having said that I suppose, we kind of got through a full programme at the same time“.

I’m sure everyone was delighted as we made a gradual return to the pitches in mid-May, albeit in small groups and non-contact training but it was a start as we relished the summer that was coming! John touched on the importance of getting together in your local pitch and having that friendly interaction, after the last eighteen months or so, this is something we won’t take for granted again; “It’s about getting children and adults I suppose out onto the playing fields and promoting our games, it’s very hard to do that when you weren’t in a position to actually go to the field and that, ’twas the uncertainty at times that was tough“.

So as the Mid-County GDA, what are does that cover and maybe give a flavour of the work involved? “Well the area I cover, nearest to the city would be Butlerstown and you’d go as far as Rathgormack, St. Molleran’s, Stradbally and all the areas in between, like Portlaw, Dunhill and all around that area. So that would be the main focus of my work, both primary schools in those areas and the clubs (regular visits and interactions on how the underage scenes is going and progressing). Then on top of that I was assigned to look at special projects during the year as well and set up a committee to look at that“.

The Special projects programme was to prove a big hit this year and John started by setting up a committee in which he was joined by Liam Cheasty, Dave O’ Regan and Vinny Walsh; “We sat down and we looked at different areas that we needed to address. We looked at assisting clubs on promotion of their entry level programmes (that first step into GAA) so that would have involved the Well!Kids, plus we started getting information from all the clubs as to what their nursery programmes were. We put together a form with all the information on it, we got that into the local papers (News & Star, Munster Express, Dungarvan Leader, Dungarvan Observer) and it was really just to focus on parents who wouldn’t have a traditional background in GAA, mightn’t be aware of what activities were there, especially for younger kids. We felt it’d be a good way to promote that, the other thing we looked at then and this came out of the Waterford Strategic Plan, the Well!Kids programme. We piloted 6 clubs in each of the Divisions, two mid-county, two East and two West. These clubs then, we gave them a support network of different activities and we constantly liaising with them. One of the other things was the Jerseys so Azzurri came on board, designing a jersey for the kids for each club and this was a big hit. That’s something we’d be looking at next year and rolling it out to every club in the county“.

John also headed up another unique project this summer which I’m sure many of you would have seen across the Déise Óg social media platforms, Beat The Backs which was a target hurling game used to enhance skills but primarily just to have fun, particularly with the younger kids. This project was rolled out across various Kellogg’s GAA Cúl Camps throughout the summer and proved to be a big hit. John’s brother Dermot was central to creating this fascinating piece of work, there’s a bit of work putting it together but it’s a fabulous asset to have and hopefully this can be rolled out even further in 2022 which isn’t too far around the corner! Stay safe everyone and have a nice Christmas, see you all in the New Year!

To LISTEN BACK to John’s audio piece, please click the following link – https://youtu.be/LVmP0Tx4BDY