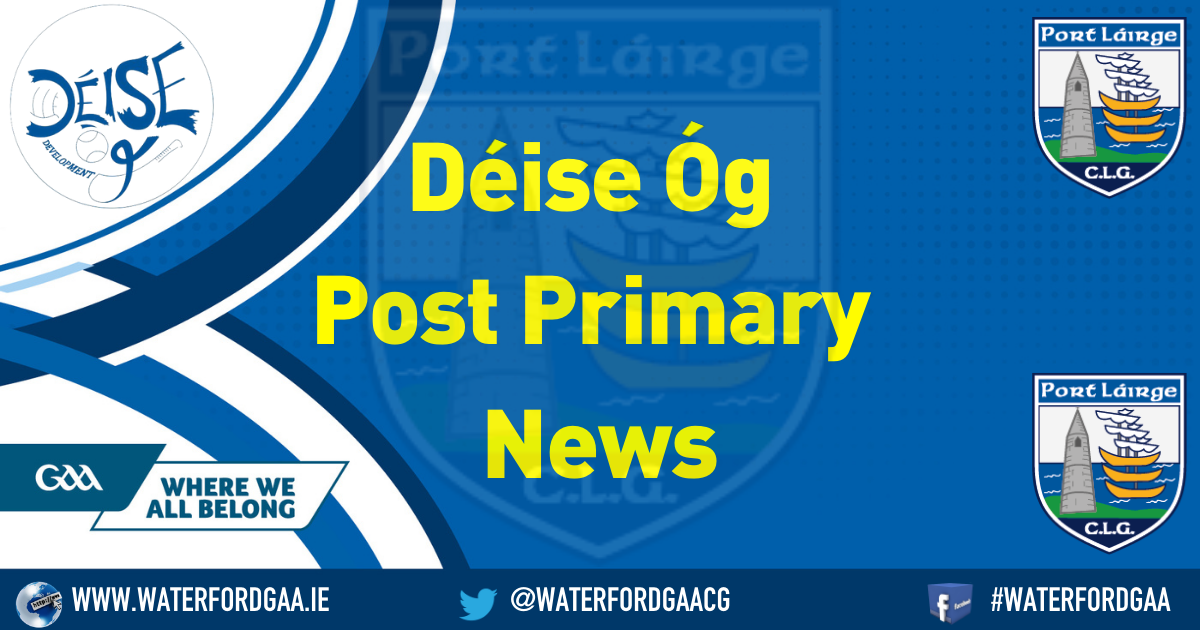 Congratulations to Jamie Dundon (Pictured) of Ard Scoil na Mara and Emma Roche of Blackwater CS who were selected as the winners of the Waterford Post Primary GAA Media Competition before Christmas. Their entries include a mixture of photography and a match report. (See entries below)
The Competition is open again for the second half of the year and entries are being accepted up until the 31st of March 2023. It is open to all Secondary School Students in Waterford who can enter using various forms of media. It may be relevant in particular to students doing their CBAs and other projects. See the poster below for further Information: 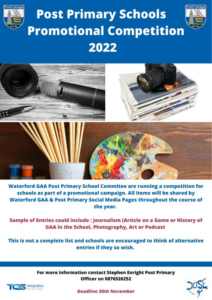 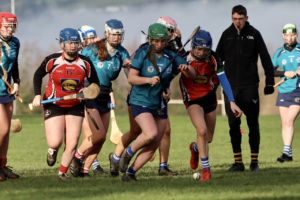 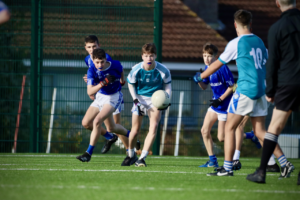 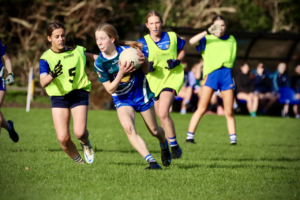 On Thursday the 13th of October, the Blackwater Community School Senior Hurling team faced against a strong Coachford team. It was their first match of the championship. The match didn’t start in BCS’s favour with Coachford being the first to add to their tally. It wasn’t looking great for our lads as Coachford kept adding to the scoreboard. But they fought back with Joe O’Keeffe putting the first score for BCS over the bar from a free from the 65. Even though the backs were under immense pressure from the strong Coachford forwards, the full back line, of Eoin O’Brien, Stephen Roche, and Tomás Ahern, kept all attempts at goal at bay.

Starting from a Coachford puck out, Shane Martin got on the break of the ball and through a series of passes from Alex Bennett, Conor Henley, Gus Nugent, and finally to Joe O’Keeffe who popped the ball over the bar. After a series of attempts from both teams, the ball found its place over the Coachford bar from a Joe O’Keeffe free. However, Coachford continued to protect their lead.

It seemed as though all BCS’s work would come undone as a Coachford forward beared down on goal, but a cool and calm Adam O’Dwyer pulled off a fantastic save. Our two corner forwards, Ben O’Sullivan and Charlie Lineen were making brilliant runs for the ball, but a strong Coachford full back line kept all attempts of goal at bay. The first half finished with Ben O’Sullivan scoring 2 fantastic points and Joe O’Keeffe scoring 6 points from frees and a point from play to have the half time score be 13 points to 9 for Coachford.

After a tough half-time talk from Mr. Perrott, Mr. Foley, and Mr. Cronin, the boys were ready to get back into it. One substitution was made with a young Joseph MacDonald replacing David Skehan. The second half started off on the right foot for BCS with yet another free from Joe O’Keeffe. The half back line, of Liam Coughlan, Gus Nugent, and Conor Henley, kept us in it with their strong defense. This meant that the forwards and the midfielders had the opportunity to keep chipping away at the Coachford lead. With a further two points from Joe O’Keeffe and a point from Ben O’Sullivan, this meant only one point separated the sides. However, after a sum of BCS wides, Coachford took this opportunity to increase their lead.

After immense pressure from Shane Martin to block his marker, Joe O’Keeffe managed to get on the breaking ball who then handpassed it off to Ben O’Sullivan. Ben beared down on goal, surpassing his marker and took a shot on goal which was brilliantly saved by the Coachford goalie. But Tadhg Duffin swooped in on the rebound and managed to get the ball past the line for BCS. This boosted the BCS lads’ confidence and instilled belief that the match was there for the taking. A change was made with Martin Power coming on to add fresh legs to the team. However, this did not dampen Coachford’s confidence as they instantly responded with a point. The BCS boys didn’t back down with two consecutive points from Ben O’Sullivan to make the game level for the first time.

With tensions high with two minutes left in the game, Coachford regained their lead with another point. From an Adam O’Dwyer puck out, Stephen Roche, as the captain, decided to leave his full back position to score a point to level the game. With only one minute left it was anybody’s game. In the remaining few seconds coachford won a free which would be the decider of the game. Over they put it. Disappointment fell on the sideline when the final whistle was blown. It

was a hard-fought battle from both sides, but Coachford came out victorious with a final score of 19 points to 1.15. 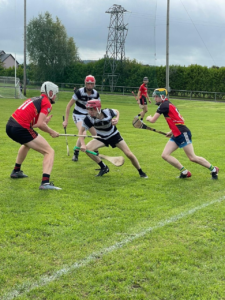