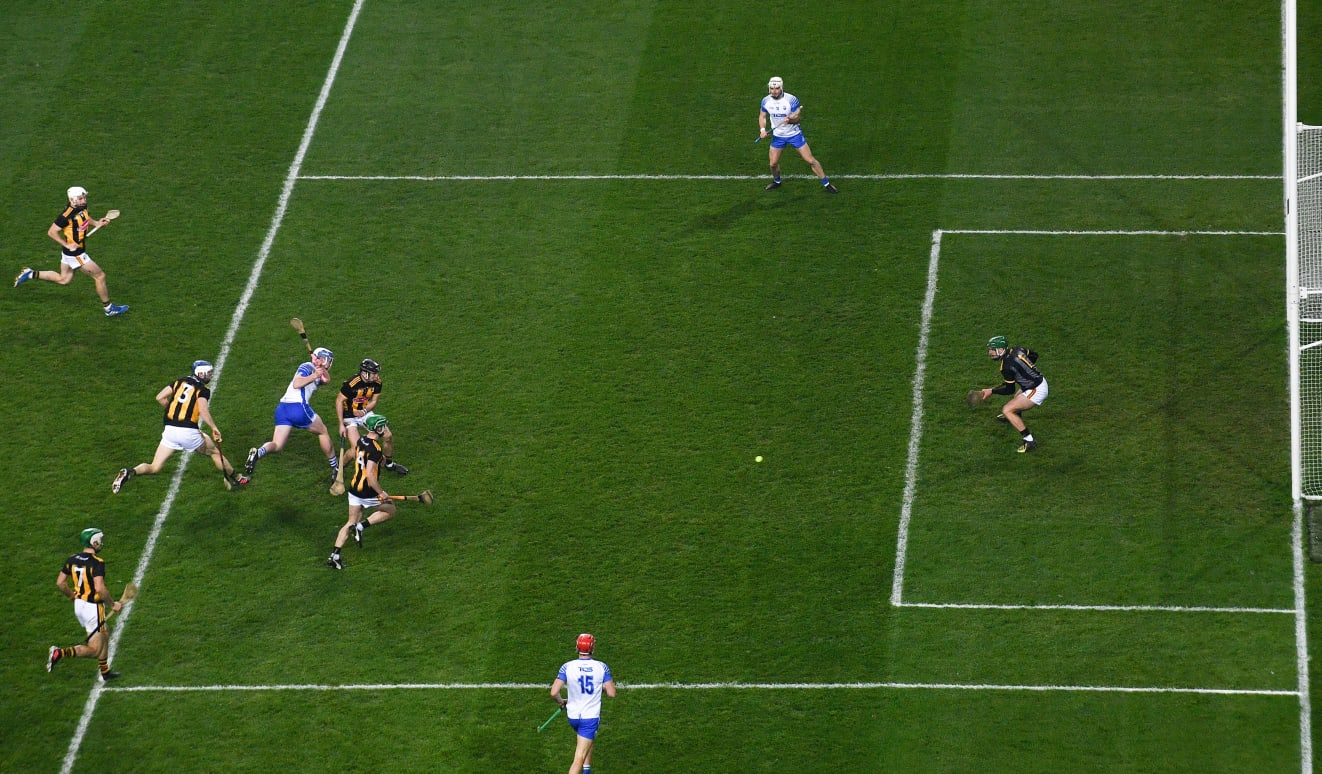 By John Harrington at Croke Park

The first half had been poor enough fare and at half-time it very much looked like Kilkenny were going to win this game and probably win it well.

If you did decide to change channels, boy did you make a mistake.

Waterford summoned one of the great championship comebacks in the second half as they turned what had at one stage been a nine-point deficit into a four point victory.

Towards the end of the game you could have powered a good portion of the national grid with the energy the Waterford players bristled with, and their animated manager Liam Cahill would have supplied the rest.

In that second half Waterford exemplified everything good about the game of hurling – raw courage, abrasive physicality, sumptuous skill, and some audacious scores.

The catalogue of errors was long and, at times, calamitous, with the main problem a tendency to take way too much out of the ball.

Time and again Waterford players chose to put their head down and run with the ball instead of getting it up and finding a team-mate with a pass.

This is always asking for trouble against a team as adept at swarm tackling and tenacious tracking as Kilkenny, and the sight of a Waterford runner being dispossessed became a familiar one as the first half wore on.

Liam Cahill’s team were also guilty of conceding cheap frees, and the extent to which they weren’t quite mentally sharp enough was summed up by the sight of Ian Kenny hand-passing a ball over the sideline and Calum Lyons being penalised after catching a great ball but then taking too many steps with the ball even though he had ample time and space to clear it.

In fairness to Lyons, he was Waterford’s best player in the first half, scoring two really good points, but he’ll be really disappointed to have given away a free like that.

And when Waterford did manage to engineer good scoring chances, they just weren’t clinical enough. They hit nine first half wides, many of them of the very bad variety.

Kilkenny hit some poor ones too, but overall their more direct brand of hurling was paying much more dividend.

They were 0-3 to no-score ahead by the fifth minute thanks to two TJ Reid frees and a classy point by the lively Eoin Cody.

Just when it looked like Waterford were finally starting to find some rhythm after nice points from Calum Lyons and Jack Prendergast, Kilkenny sickened them with a real gut-punch of a goal.

Stephen O’Keeffe might have intercepted a through ball had he not stayed on his line, and his hesitation allowed Richie Hogan to race onto it and unleash a shot that the Waterford goalkeeper did well to stop.

He could only divert it into the path of Martin Keoghan, though, who dinked it up and doubled to the net.

The teams exchanged two more points each before Kilkenny struck for their second goal after 26 minutes.

Conor Prunty failed to catch a high ball above Richie Hogan and that master assassin, TJ Reid, showed great anticipation to race onto the ball without breaking stride before smashing it to the back of the net to put his team 2-7 to 0-5 ahead.

Kilkenny were nine points ahead by the 31st minute, but Waterford did rally before the break, thanks mainly to Stephen Bennett who at times looked like he was on a one man mission to drag his team back into the contest.

The point he scored on 33 minutes was as inspirational as they come, as he set off on a mazy 40 yard run before firing over the bar off the stick.

It was Bennett who had the last say of the half too, his converted free leaving Waterford trailing by 2-11 to 0-10 at the break.

You can be sure Liam Cahill had a few choice words to say at half-time, and whatever they were they certainly had the desired effect because in the third quarter Waterford outscored Kilkenny by 1-11 to 0-4.

The simplistic answer is that Waterford dominated possession and everything flowed from there.

They murdered Kilkenny under the high ball and dominated the vast majority of rucks for possession on the deck too.

And now, their decision making was far better than it had been in the first half.

Players were picking their passes instead of running into traffic, and the sight of Waterford inside forwards running onto nicely angled deliveries into space became a common one.

It helped too, of course, that they scored a goal just three minutes into the second-half that gave the entire team an electric shock of self-belief they so badly needed.

No surprise it was that man Bennett who scored it, and it was a sweet strike too as he showed great wristwork to double the ball to the net on the ground after his first attempted shot was hooked.

The opportunity was created by Jack Fagan who plucked a ball from the sky and would continue repeating this trick throughout the second half to give Waterford an invaluable beachhead in the Kilkenny half of the field.

Fagan scored two points himself in the second-half as did substitute Neil Montgomery and both men typified the industry and ambition of Waterford’s approach.

To complement that graft they had the guile and at times outrageous skill of Bennett and Austin Gleeson who also thundered into the contest.

Those two gave their team further impetus with two points in the space of a minute after jet-heeled solo-runs, with Bennett even popping the ball over Paddy Deegan’s head on the way for good measure.

Kilkenny were struggling to clear their lines now such was the intensity the Waterford forwards were exerting without the ball, and what ball clearances they did make were often hurried which made life tougher at the other end of the field for the Kilkenny forwards.

Cillian Buckley and Richie Hogan nabbed a couple of classy points against the head, but Waterford were relentless now and drew level on 50 minutes when Austin Gleeson landed another fine point.

A Dessie Hutchinson point sandwiched by two from Montgomery meant Waterford led by 1-21 by 2-15 at the second-half water-break, which seemed to briefly stall their momentum when it came.

Kilkenny introduced heavy duty subs like Colin Fennelly and Walter Walsh to try to turn the game around, but it was only TJ Reid’s superb free-taking that was keeping them in the game.

Another sub, Niall Brassil, had a sniff of a goal chance on 57 minutes that might have made things interesting, but thereafter it was Waterford who put their foot on the accelerator again.

Fagan pointed after another superb fetch, and then substitute Darragh Lyons tore through the Kilkenny defence and finished emphatically for Waterford’s second goal of the match.

Kilkenny kept fighting like they always do, but you just knew it was going to be Waterford’s day when Austin Gleeson landed another wonder point when striking the ball over his shoulder while in the act of falling.

That the 2016 Hurler of the Year looks like being back to his best should be a huge source of encouragement for Waterford fans as they now look forward to the All-Ireland Final with what is surely giddy excitement regardless of whether Limerick or Galway provide the opposition.

Liam Cahill is doing something special with this Waterford team, and it’s easy to believe anything is possible now after a second half like that.