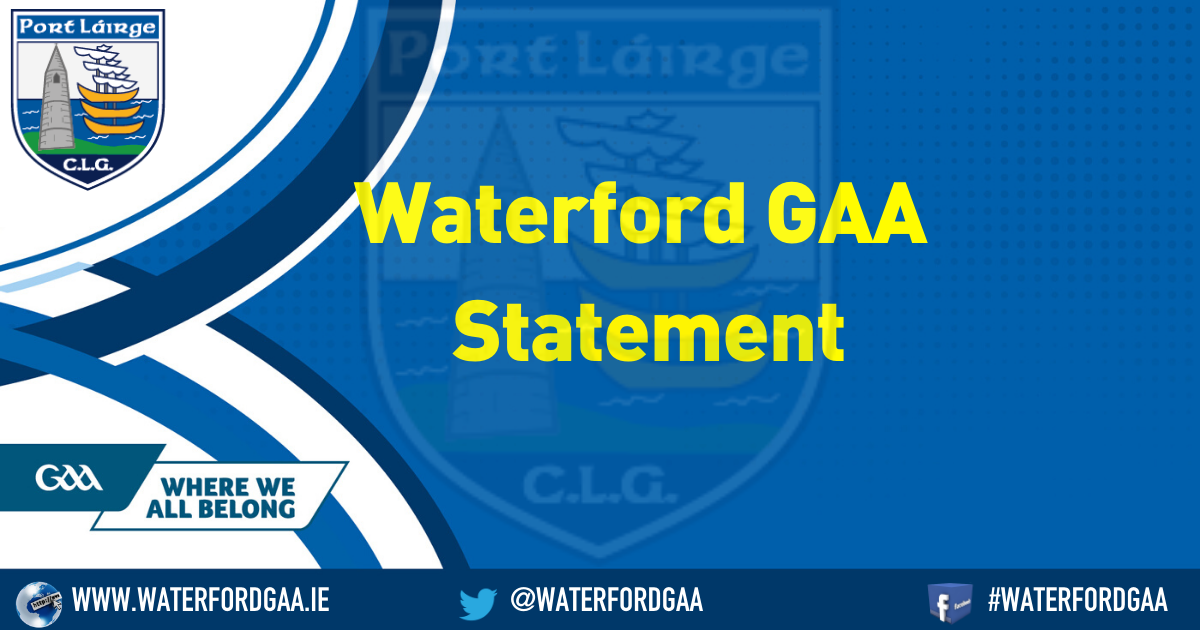 Issued on behalf of the Waterford Senior Football Players and Team Management in consultation with the Management Committee of Waterford County Board.

At the outset, we want to first of all acknowledge the efforts by all concerned in getting the inter county season up and running, which has been greatly welcomed by all our players here in Waterford, particularly given the unprecedented times we are currently living through. We have had a fantastic response from our players to date in terms of effort, compliance with public health guidelines and everyone was looking forward to getting back playing inter-county again.

Unfortunately, having weighed up all the options and having regard to the genuine concerns of our players, we had no choice but to concede our final league match versus Antrim this weekend. This is not a decision that we have taken lightly, particularly given the fact that our game versus London scheduled for last weekend also fell victim to the Covid-19 crisis, which puts us in a very vulnerable position going into the first round of the Championship versus Limerick on Saturday 31st October, given that they will have had the opportunity of having played 2 league games.

At the end of the day, our players come first as they have put everything on the line to date to make themselves available to play for their county and irrespective of the impact our decision may have on the final league standings, the management team felt obliged to respect their health and welfare concerns in not wanting to have to travel to Antrim this Saturday for a 2pm throw-in.

We wish to acknowledge that several options were considered and proposed but for varying reasons, were not a runner.

These included a request issued to Antrim to play the game at an alternative venue closer to Dublin with a view to reducing the travel time to the game and allay any concerns that players had with travelling to the North given the current Covid-19 situation there. Unfortunately, Antrim were not able to accede to this request but had agreed to look at an alternative venue within their own County that would be closer to Dublin, which we would like to acknowledge.

The decision was reached following the withdrawal of a number of the panel members due to:

The personal family circumstances of some of the players, leading to concerns and reservations within the playing group of traveling to the Belfast area. These personal circumstances must be respected. Further, the reservations of spending a night in a hotel, coupled with the risk associated with the general exposure relating to the 24-hour period.

The employers of several players and members of the team management stipulating that a 14-day isolation period would be required on returning from Northern Ireland.

Serious consideration was given to these two major factors along with the possibility of any incidence of Coronavirus transmission to any of our traveling playing group with a turnaround time of seven days to the Munster championship.

We would like to reiterate that Waterford were and are prepared to play our final League game against Antrim at a neutral venue in the Republic and we think that given the current circumstances, this is a reasonable request.

We ask that the wider GAA and media respect our decision which was taken in the best interests and welfare of our players and management. ENDS