Huge Demand as Coach Education Season Kicks Off in Waterford 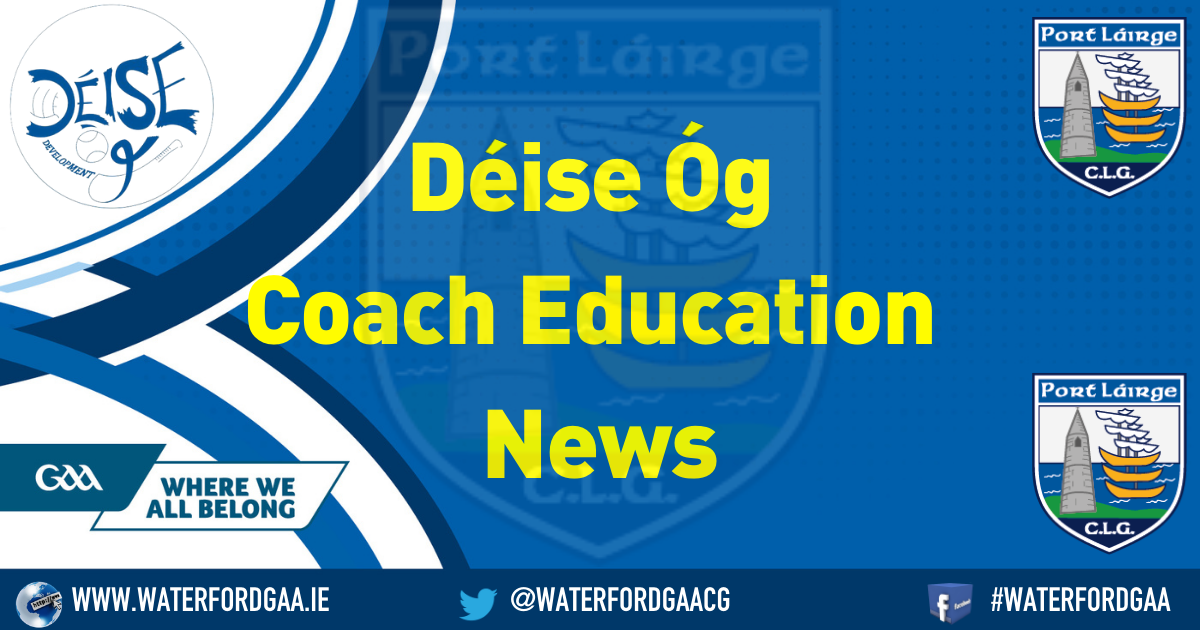 The GAA Coach Education season is upon us in Waterford once more with an extensive programme currently being put together by the Coach Education Committee for the coming months.

Coaching courses will be offered at Foundation, Award 1 and Award 2 levels across the next six months with both formal and informal offerings available for coaches at all levels. To kick things off, invitations of interest are being invited from new and existing coaches for the GAA Foundation Coaching Course with information on Award 1 and Award 2 courses being made available in the coming weeks also.

In the short term, interested coaches are being asked to fill in an Expression of Interest form for the GAA Foundation Coaching Course.

To express an interest in completing a GAA Foundation Course, just click the following link and fill in the EOI form: https://forms.gle/DTMqCceBshsdBM9t8

According to the county Coach Education Coordinator, Déise Óg GDA Barry Dunne, demand for coach education in the county has never been as high.

“Yeah, I think it’s fair to say that the past 12 to 18 months have been the busiest we have ever seen in terms of demand for formal and informal coach education. It has been really, really hectic which is exactly what we want to see. There is a vibrancy there now and it is infectious, clubs want to really push on and develop their coaches and coaching standards. I suppose there has been a recognition by clubs and individual coaches of the importance of coaching and from senior right down to under 6’s the effects of positive, quality coaching can be very far reaching.”

The impact of COVID-19 on clubs since March 2020 has been devastating in many ways. As well as the obvious tragic human cost, there were long periods for clubs of no games or training. Huge gaps in the season emerged and coach education became something vital and timely to fill that gap. So out of something that was desperately negative for clubs in so many ways, there was at least some positive green chutes that emerged.

“Ah yeah, there was definitely an element of a perfect storm in terms of an upsurge in interest in coach education coupled with the various lockdowns we had over the last 18 months. Prior to March of last year, we had started to notice a good uptick of interest in coaching in the county. Like we had over 120 people at the South East Coaching Conference in Carriganore in February 2020 right before the lockdown, which was amazing. Little did we know what was in store only two weeks after this. Then COVID hit, and people who had previously been too busy or didn’t have time for upskilling started to really engage with our formal and informal coach ed. So it kind of snowballed from there. The feedback we have been receiving from coaches about our webinars, coach ed courses, YouTube skills videos and so on has been massively positive. And they want more of it, which is just brilliant to see. It all points to a really bright future for clubs if their coaches are that engaged and willing to drive things on”

With the impact of COVID 19 severely diminished due to a widespread and successful vaccination programme across the country, are we likely to see a return to normalcy in terms of the coach ed offerings in the coming months? Barry is of the opinion that the time is right for a return to a more normal programme of events.

“We are definitely planning on offering a full and varied programme of coach ed events in the next six months, both formally and informally. We had always planned on running another South East Coaching Workshop in February 2022 and it looks likely that we will be able to run a very similar event to what was ran last time around in the WIT Arena. Our Spring Webinar Series which was such a big hit with coaches in the earlier part of this year will be back again in much the same format. We will obviously have the formal coach ed courses which are our bread and butter and they will be ran on a predominantly face to face basis in venues all over the county. And we are hoping to run club and divisional coaching workshops on topics and areas that interest clubs as well as other coaching initiatives in the next while. So there is lots to look forward to and we are hoping that clubs continue to engage with us and keep on pushing us to deliver the best programme we can.”

All in all, an exciting time ahead for coaches and clubs across Waterford and we hope to see every club in Waterford continue to ‘raise the bar’ in coaching terms over the coming months.